I'm so excited for Thanksgiving!! I thought it would be a good idea to run a 4 mile race in the morning which will probably be lame, but after that it's gonna be a great day.

I've actually already put up a few (very few) Christmas decorations and I may or may not be listening to Michael Buble's Christmas album right now...but I'm still excited for Thanksgiving!! Swear. The only reason I decorated early was cuz I got in major cleaning mode at my house and decided to get everything organized and set up at once. And I was in major cleaning mode cuz I got new furniture for my room and had to get that all put together. My room actually looks like a grown-up room now---not your average college dorm. Not that there's anything wrong with college dorms. But I have an actual bed now, with a matching dresser and even a night stand. Like I might actually be in my house semi-permanently or something. Weird.

You know what else is weird? This picture from our ward Thanksgiving party. 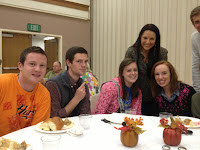 There are two boys that were cut out because the person taking the picture didn't realize they were leaning in and posing? At least, he looks like he was leaning...


Happy Thanksgiving!!
What are you Thankful Five?

My cousin Becky thinks I need to blog again. I think she's crazy. Anyway. I was gonna tell you about all the awesome things for which I'm thankful---tis the season and all---but then I decided to tell you a story instead. I went to a gas station. To get gas. And the first pump I went to had a screen that didn't work. So after trying for a few minutes to figure out what to do, I gave up and pulled up to the next pump. Only I didn't pull up far enough. And after putting in my card and entering my zip code, I realized that the hose couldn't reach my car. Awesome. So I had to put the hose back in the pump, turn my car back on, pull forward, turn my car back off, get the hose back out...but then the pump started being temperamental and wouldn't work and I needed gas!! But also I was really embarrassed. So I drove away to another gas station. And this station wouldn't authorize my card till I went inside. So that's what I did. And I finally got gas. But it was a nightmare. The end.

Posted by Barbaloot at 2:14 PM 9 comments