You know how you're supposed to learn from your mistakes? And not repeat them? Well, I don't. That is, I don't learn from them. I do repeat them. But, in my defense, not all of them. I'm not sure if this is cuz I'm stubborn or stupid or I have a selective memory. Either way, here are some things I haven't learned yet.
-Vanilla extract doesn't taste good! It may smell like heaven, but I'm pretty sure that it doesn't taste like heaven.
-Going a week without exercising, and then expecting to be able to run 6 miles without pain is not possible.
-Buying bananas that aren't ripe hoping that you'll have more time to eat them doesn't work.
-V8 is disgusting.
-Keeping in touch with old crushes/boyfriends/obsessions is not necessarily a good idea.
-A slight deviation in a diet does not necessitate a complete u-turn. I mean, eating one cookie does not then mean you eat 10 more cookies cuz "you already screwed up." Even if it is fun.
-I don't tan. Seriously-I've tried and failed numerous times. Here's the latest documentation. 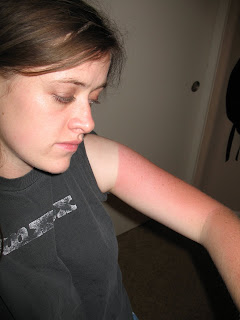 Posted by Barbaloot at 7:44 PM 6 comments

First off: I would like to apologize for my inability to properly post videos on here. As a result, you have to click on the links. But it's worth it!!
Here is the link to my old favorite joke.
Old favorite.
Now, this is incomplete. You're supposed to follow it up with the "Confused Interrupting Cow" joke, in which case the interrupter makes the sound of a cat, monkey, horse, ferrel child or some other animal that doesn't sound like a cow. Why people don't take the time to properly finish a joke and then post on youtube, I'll never know.
Moving on...
Here is the link to my new favorite joke.
New favorite.
I am not being the least bit melodramatic when I tell you that my new favorite joke has changed my life for the better.

Posted by Barbaloot at 4:17 PM 3 comments

Those three words have become the bane of my existence. Sometimes, there's even a "really" added into it, at which point it becomes a four-word phrase that I hate as badly as the four-letter words I refuse to use.

The reason for this phrase and its constant presence in my life is that technology hates me. And no, I am NOT being paranoid. I have proof. What proof-you ask? Why, I shall tell you.

Example 1:
-I'm living in Nauvoo for my semester *inbroad. We have a computer lab in the basement and everyone is supposed to go sign in with a specific password on the first day of the semester at which point they can change it to a password of their choosing. Well, I did that. And then-I was never able to log into the computers under my own login again. Ever.
So, I tell Brother Ivie-the resident computer teacher/expert/repairman. He resets my name and has me do it again. Still doesn't work. He says, "Hmm. That's weird."
I had to use my friend, Nicole's, password the entire semester. I didn't like it cuz it was annoying. She didn't like it cuz the password was her boyfriend's name and she was embarrassed. Just kidding-I don't think she cared. But that would have been funny. Right?

Example 2:
-I'm back in Provo. I work at this place. We all have outlook accounts. For six months (six months!!) I cannot log into my account correctly. I have to use a ghetto version of outlook that makes life altogether too difficult.
I talk to the tech support people constantly to ask for help. What do they say? "Hmm. That's weird." Right...thanks for the help.

Example 3:
-So, I have a TV in my room. It's a total of 12.7 feet away from the TV in the living room, which operates sans technological issues. Mine, however, does not. There are 3 channels that are in Spanish. Not Spanish channels, mind you, but NBC, TBS and TNT. Also, ABC and Nickelodeon don't even have any sound. And A&E has sound, but it's actually someone describing what's going on in the scene. Like they'll say, "Steve Martin frantically rips apart the packages of hot dog buns as a suspicious clerk begins to edge forward and demand what is going on." I kid you not, folks. Do you wanna know what the TV repair-guy said? "Hmm. That's weird." I know, right? You know what else is weird? The fact that I watch shows on all of these channels.

Example 4:
-I just bought a new phone. (And I'm in present time now. This was last week.) Apparently there's some sort of transfer with some sort of thing called a SIM card. It should move my numbers over between old phone and said new phone. Does it? If you're wondering about that, it's possible you haven't being paying attention to this post at all. So, I call tech support people. They walk me through the transfer (that I've already done and re-done). Still doesn't work. Say it with me this time people: "Hmm. That's weird." Gee-thanks for your technical support.
So-I go in person to have it fixed. Guy #1 repeats the action I've already done FOUR times. Does it work? No. What does he say? "Hmm. That's weird." I'm thinking, What? The fact that the numbers aren't there, or the fact that it didn't work even though I told you I'd already done that FOUR times?!
Then-I have a weird icon on my new phone that won't come off. Guy #2 says it means there are too many messages saved. Dude-it's a new phone. There are a total of zero messages saved. Any guesses as to his response?
If you said, "Hmm. That's weird," you're wrong. He said, "Hmm. That's really weird."

By the way-these are not all the examples of my technological curse; it extends to my GPS, DVD/VCRs, iPods, my new computer, staplers...wait. Staplers? Okay, maybe they don't have anything to do with technology, but I break every single one I use so I'm sure there's a connection there somewhere.

*This is akin to "abroad," only I was still in America.

Posted by Barbaloot at 3:31 PM 6 comments

I know my friend, Camille, wasn't trying to chastise me. That's what she did, though. I've spent way too much time complaining lately. I'm too bored. I drink too much water. Boys are too dumb. And so on. So, I'm going to do what she suggested and list 10 things that I am thankful for today. This is not a pre-meditated post, and as such the list is in no particular order. I'm writing as the thoughts come.

1. My sister-in-law, Tricia, and my nephew, Zach, who have both introduced me to some great new books.
2. Reese's Peanut Butter Cups. Yum!
3. Elder Wirthlin's General Conference talk from October, 2006: Sunday Will Come.
4. Nights that are 70 degrees and perfect for playing Ultimate Frisbee.
5. The new band Buffy introduced me to: The Weepies. Especially their song, Gotta Have You.
6. My co-worker, Alanda. She listens to me being dramatic and let's me feel justified in said antics. Plus, she shares good boy stories with me and does a fun[ny] cow dance:)
7. The recently obtained knowledge that I can go buy a new phone because my current one got dropped and is now deformed. It's possible that it got dropped a lot....
8. Eric D. Snider. His blog is a continuous source of amusement.
9. The fact that I got to play with 4 of my brothers and their families yesterday. Hooray for family!
10. A good conversation on gmail chat last night. I got to talk with a good friend who I felt like had started to drift away, there was no drama and I came away feeling good about myself:)

Now, I challenge you (and by "you," I mean whoever is reading this) to do the same thing. Leave a comment about something for which you are thankful. Or write you own post about it. Or make a poster and stand on the road for everyone to see. Or write a song. Anything really. However, if you leave a comment it will make me happy because I'll think I have friends and/or readers and that will be one more reason for me to be thankful.

Also, if you read this and don't do something that resembles a thankful act, I'll judge you. Well...I guess I have no way of knowing who you are and whether you chose to be thankful or not, but know that if I did, I would judge you. And I mean that in the nicest way possible:)

Hollywood:
-There's a beautiful young girl whose hair always looks perfect, she can eat whatever she wants and excels at some sort of amazing skill. A good-looking, kind, smart, funny, sensitive, athletic, popular (and usually wealthy) guy likes her but for some unexplainable reason she isn't interested in him because she's too busy/scared/confused/otherwise occupied etc. Does this stop him? Of course not! He continues to pursue her and she finally decides she likes him, too. Conveniently enough, he's still around despite that fact that she's shafted him 8 or 9 times and he's still just as willing as he was at first to be with her. They kiss.
Real Life
-Girls spend a lot of time trying to look good and stress over everything they wear and whether or not the guy they like will think she looks good. Little do they realize, it'll be a miracle if the guy can even remember later whether she had on pants or a skirt.
Not only that, but whatever guy a girl is obsessing over is probly a little bit of a self-centered jerk who might hang out with her if she puts all the effort into getting things set up, but otherwise she'll probly never see him, let alone have him ask her out multiple times without giving up cuz he's just that determined. Yeah right.
And even though she knows in her heart she can do so much better she's hoping she's wrong about him. And every time he does something that tells her he's no good, she ignores it. And every time he comes through and surprises her, he wins her over, and she loses her own argument that he's not for her.

Posted by Barbaloot at 2:30 PM 7 comments

*I'm pretty sure this isn't allowed at work. I'm also pretty sure that HR would not know how to deal with someone dying at their desk of boredom, so for now I'm willing to risk it.

Posted by Barbaloot at 3:51 PM 3 comments

Today started off as a terrible, horrible, no good, very bad day. I was irrationally annoyed at everyone and everything and all I wanted to do was go home and eat chocolate and watch a movie. In my jammies.

And then, I spilt my ice water ALL over the break room at work. Actually, it wasn't all over the break room-cuz most of it managed to get all over my pants. And I laughed. Cuz it was funny. And then my day wasn't so bad anymore. Granted, it's not quite 2:00-but I have high hopes for the rest of the day.

Also, that's two posts in a row where I talk about water. I'm weird.

Posted by Barbaloot at 2:41 PM 2 comments