Question: Is it appropriate to ask a casual acquaintance what their yearly salary is?
Answer: Not only no...but heck no!
Then why, I wonder, have several people asked me that exact question in the past few days? What's with you people? I don't want to tell you what I'm being paid. Leave me alone.

And in the vein of conversations...people need to learn how to have them. I will fully admit that I am not a pro-conversationalist. However, I am capable of asking people questions and carrying things along. People need to learn the art of reciprocation. I ask you a question, you do the same back. It's not that hard! And, if you don't want to do that, it's fine-but don't hover in my vicinity if that's the case. If you don't want to talk, walk away. I'm okay with that. I'm not okay with surface conversations feeling like a psychological work-out.

Posted by Barbaloot at 6:12 PM 1 comments

I now feel like I have officially taken the last step in my 'rite of passage' as I leave the Utah Valley bubble behind.

I had lunch today with three black men. As I look back on my 23 years, I don't think I ever even knew three black men, let alone was with all of them at the same time.

It was somewhere during the "downfall of rap" discussion that I began to realize how much this would never actually happen in Utah. It was a good experience...but I still miss my bubble.

Posted by Barbaloot at 8:43 PM 4 comments 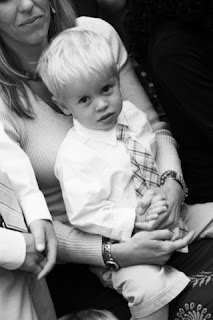 This post is dedicated to my nephew Ammon. The kid isn't even 3 years old yet and he already knows WAY more than I ever will about motorcycles, dirtbikes and any other two-wheeled toy that fits into that category. Seriously, he knows his colors in relation to dirtbikes. For example, green=Kawasaki. We went to get ice cream the other day, and he wanted Kawasaki ice cream (mint chocolate chip).
I love how different little boys are from little girls. What is it about the posession of a Y chromosome that enables them to perfectly imitate any kind of motor, memorize inordinate amounts of sports statistics and build architecturally-sound lego buildings? Honestly, I have tried to do that whole truck sound-but I can't. Little boys don't even have to try-they just do it.
All I have to say, is chalk a point up for nature in its ongoing debate with nuture.

PS-Don't tell me you don't think he's a really cute kid, cuz I won't believe you.

Posted by Barbaloot at 9:19 AM 3 comments

Happy Columbus Day!
I'm expecting that there are two responses to that. The first is those thinking, Hey-I thought Columbus Day was Monday. Well, you're wrong. That's the bank/U.S. Postal Services' attempt to give themselves a three day holiday. The audicity of changing the actual date a historical event happened is something I can't even begin understand. Surprising as it may seem, Columbus did not reach the shores of North America on the second Monday of every October. Weird-I know. But really, it was October 11th, 1492.
The second response, the one I'm aware would come from 80%* of Americans is Huh? That's right people; we actually have a Columbus Day. Why don't you know about it, I wonder? Well, because it's not talked about in schools, unless you work for the government you don't actually get the day off, and because the crazy PC activists want to pretend it didn't happen. Contrary to what they may tell you-it was a GREAT thing. It's one of the many reasons you're actually capable of sitting in a free country right now reading this blog. We shouldn't be embarassed, ashamed or sorry it happened. We should be grateful!
So-just remember when you're busy having a regular day on Oct. 11th. It was a huge day in history. It should be celebrated and revered, not swept under a rug.

*I made this statistic up-but it's probably too low. I dare you to pull a Jay Leno and walk the streets asking people if they know when Columbus day is.

Posted by Barbaloot at 9:13 AM 6 comments

I became the person I try to avoid last night.
I was fully exhausted after my fun trip home-and those of you that know me well know what happens when I'm exhausted. I get all sneezy and sniffy.
So, I board the plane and try to sit far away from people that have ears so I won't bug anyone, but I still was surrounded. So, I spend the entire flight sneezing, sniffing and blowing my nose and pretending like it wasn't really that bad and that the people sitting near me couldn't really hear or tell that I was miserable. Of course, we all know they heard me and were annoyed that they had to sit by the obnoxious girl. I know that's how I would have felt.
At least I have the satisfaction of knowing that allergies aren't contagious so it's not like any of them suffered further once we de-planed.

Posted by Barbaloot at 9:10 AM 2 comments

I absolutely love the bands ABBA, REO Speedwagon and Chicago. I crochet. I'm afraid of revolving doors.
I'm a dork.

Posted by Barbaloot at 8:54 AM 1 comments

boys should NOT wear shants

Lesson #1; If you go to Break the Fast, don't say anything bad about what you're eating unless you are certain that whomever made the particular food you're criticizing is not within earshot.
Lesson #2; If you're going to make a fortune cookie-put an actual fortune in it; not some "wise saying." Then, I won't criticize what you made.