Today I went to my grandmother's 100th Birthday party. She told me she hopes I live to be 100. I'm not so sure I feel the same way... She also told me I was her favorite part of the party. I may or may not have pressured her into saying that.

This picture is of my mom(standing), my Aunt Barbara, my grandma and me at our family reunion this past summer. 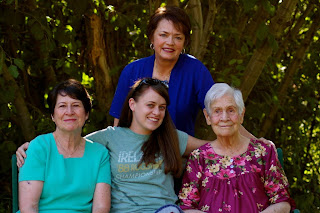 My grandma is an amazing woman and it was great to go to her party and see so many of her friends and family who are better people for having her in their lives. If I live to be even half as awesome as she is I'll consider my life a success.

Top Ten Christmas Songs About Which I Have Strong Feelings

There a a gazillion Christmas songs that could be on this list, but I'm limiting it to ten. And since I already told you about my favorite song, "Thistlehair," it didn't make this particular list.

10. Very Bad. 'Little Drummer Boy." I'm sorry-maybe I'm a huge Scrinch (Scrooge+Grinch) but I cannot stand this song. I mean, playing drums for a baby? A newborn baby? No way is that good for a baby's cognitive development. I realize that's not the point of the song. That I should focus on how nice it is that the little shepherd boy is doing the only thing he can for the Christ child. But the logical side of me (surprisingly, I do have a side like that) can't get past playing a drum for baby. And also, "the ox and lamb kept time." Really? How? Stomping? Swishing tails? It's just silly.

9. Good. Manheim Steamroller's "Hark the Herald Angels Sing." This is the first song on their blue album and it always got me so excited for the Christmas season. If this song was on during our decorating I was much more prone to quickly arrange and display things rather than drag my feet and do as little as possible.

8. Bad. "Linus and Lucy." I mean, really? It's not a Christmas song people! I get that it's on a Christmas movie...but you know what, so is the song you hear George Bailey and what's her face dance to before they fall in the pool. You don't hear that on the radio. Same goes from "My Favorite Things" for Sound of Music. You're taking songs I love and making me angry about them by playing them in the wrong context, people!

7. Good. I'm vaguley ashamed of these two (yeah, they're basically the same so they count as one) but still, I love them: "All I Want For Christmas" Mariah's version and Celine Dion's "Christmas Eve." They're grossly cheesey, but so fun to listen and sing along to in the car. And also to dance to with crazy cousins.

6. Tremendously Bad. "Rudolph the Red-Nosed Reindeer." I struggle with movies and/or books that give animals human characteristics such as, I don't know, talking. (Don't even get me started on a walking, talking pile of snow.) Apparently that carried over to songs as well. Reindeers can't shout with glee. And also, it reminds me of the freakish clay-mation movies that are the stuff of nightmares.

5. Good. "Last Christmas" by Wham. Mostly cuz they say "...but the very next day, you gev it away." Gev. I swear-that's how they pronounce it and it makes me laugh every time.

4. Sort of Bad. "It's the Most Wonderful Time of the Year." Now really-this isn't a bad song. And it is as Johnny Mathis claims, arguably, the most wonderful time of the year. But, the part where it says, "...there'll be scary ghost stories..." What? Why? Why would there be ghost stories. Hello, it's not Halloween. I'm fairly certain none of my Christmas traditions involve ghost stories. Okay---and as I write this I may or may not have suddenly thought of A Christmas Carol. But I stand by my original belief: Christmas is not a time for ghost stories. Especially not scary ones.

3. Good. Kurt Bestor's "Silent Night." Just hearing that song makes me feel like I should be sitting by the fire in my parent's living room with no lights except those on the tree and drinking hot chocolate. Or maybe I'll turn some lights on so I can read a good Christmas book while I listen. Either way, there'll be hot chocolate.

2. Tremendously Good. "I Want a Hippopotamus for Christmas." I mean, whoever sings this some is made of pure awesome and has a voice cuter than a basket full of puppies. I could listen to it constantly during the holidays and still love it. And really, what's the thought process behind wanting a hippo for Christmas? What would one do with a pet hippo? And also, the hippo doesn't talk. I have no aversion to songs about animals who have solely animal characteristics.

1.5. Really Good. I'm cheating---but I have to include the entire Jackson Five Christmas CD. Except for songs 5-7 (which are mentioned in nubmers 10 and 6 on this list). I love Michael's younger voice---and the arrangements are not unlike my number 7 songs where I really just have to turn up the volume and sing in the car.

1. The Most Good. "Have Yourself a Merry Little Christmas." Mostly, Judy Garland singing that song in Meet Me In St. Louis. Such a gorgeous voice and sweet moment in the movie (even though I'm mad at her for not staying engaged to John Truitt. And even though Tutti a little bit drives me crazy). It's just awesome.

The Spirit of Christmas

I have a couple posts that are swimming around in my head right now that are somewhat sarcastic. Me? I know, weird right? But as I was thinking about posting one, my mom reminded me that today is my brother's 3rd "birthday." And that birthday made me feel much more like posting something positive.

A little over three years ago, my dad called me one night to say my brother Perry's kidneys were failing. Big time. He'd need a transplant ASAP or he'd have to go on dialysis. It was terrifying and heart breaking and I was so scared for him. No 23 year old should ever have to face a life-threatening situation like that. But Perry was. And he was so brave and positive about it. The response to people finding out about his failure was so amazing. Brothers, cousins, uncles, aunts...all were willing to offer up one of their own kidneys to save Perry's life. Our brother Joey grew up knowing about Perry's kidney condition and knowing that he'd probly end up being a donor one day. As soon as he found out about Perry, there was no hesitation on his part. He told Perry he'd always planned on giving a kidney to his brother---and he was ready.

There were a million prayers leading up to December 14, 2006 for the safety and health of Joey and Perry. I know the doctor's hands were guided that day so that everything went well. I know they were both blessed in their recovery. 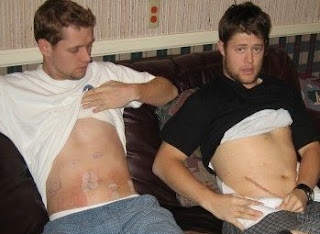 Joey truly is a modern-day hero. He didn't hesitate for one second to give up a part of himself to save his brother. I'm so impressed by his sacrifice and grateful that today it could give me a feeling of the true spirit of Christmas.

Christmas is such a wonderful season and such a great excuse to open our hearts to serving and loving others. It's also a time to remember our Savior, the miracle of His birth and His sacrifice for us. I hope this season we all have a chance to recognize the heroes in our own lives and the blessing of our Savior.

My Gift to You

As my Christmas gift to all of you...I am introducing you into my cousin, Becky's, new blog. 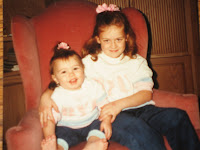 That picture is Becky and me at Christmas-time, 1992. Becky was actually supposed to be my sister. But my parents stopped having kids after me...something about 12 being enough? Anyway, that means Becky was sent to my double cousin's family so she would not be left up in Heaven to suffer the almost-similar fate of poor Emily in Saturday's Warrior.

She (Becky, not Emily) also mistakenly went to BYU-Idaho and I'm still trying to convince her of the error of her ways...but for now will have to content myself with the fact that she finally has a blog. The picture below is Becky and me right before jumping off a bridge in New Zealand. 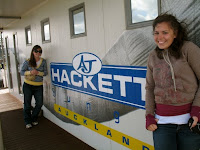 Becky is hilarious, her ability to quote movies is inspiring and her taste in cheesy romance books unparalleled. As my Christmas gift to you, I've provided you with the link to her blog. You're welcome. Go check it out. She even dedicated her first post to me.

Merry Christmas!! What are you planning on giving me?

Get a Backbone. Please.

I started watching the newest BBC version of Emma today. Against my better judgment. I've never liked that movie and it's not just because Gwenyth is in it. It's a bothersome movie. (That's not to say that it's remake, Clueless, isn't one of the best movies to come out of the 90s.) Anyway, I found out about it from my friend, Michelle's, blog.

I will say this: it's the best version (so far, I'm not finished yet) of Emma I've ever seen. And the girl who plays Emma does a fantastic job of NOT making me want to wring her neck as I usually do in such movies. Harriet, though. Poor Harriet. I mean-if the girl just had a backbone. If she could just make up her own mind. If she just weren't SO desperate to please Emma! Why can't she just marry Robert Martin in the first place? Really-it's ridiculous.

Even more ridiculous? Being so enamored with a painting cuz of who painted it. I mean-was the pastor (preacher? reverend?) so dim-witted as to think Emma would interpret his love of the portrait as his love for her? Honestly.

Anyway, after that marvelous review, here's the link of the first part of the first episode if you want to watch it: http://www.youtube.com/watch?v=wIDDka3X-LI&feature=related. One positive thing this movie had going for it: Mr. Knightly finally has a first name. It always drove me crazy that he never had one. Ridiculous.

I realize I may have some people want to stone me for my dislike of this so-called classic. If that's the case, so be it. I have a backbone and will stand by my opinion.