I Think I Broke My Kidney

Okay, so that might not be the best thing to say considering my family sometimes has this kidney disease that requires transplants...but seriously, it is the best description of how I feel. I walk like I have scoliosis and I do the pregnant-lady stand. You know, where you put your hand on your back and sort of roll-up out of your chair? Basically, I look awesome. 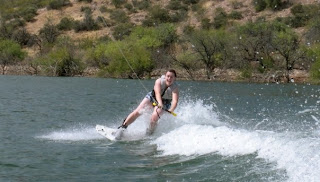 I went on a super-fast trip to AZ this week for my former roommates' wedding. And while there I managed to have two friends that were awesome enough to take me boating with them. We wake-boarded and as it turns out I'm not very good. Weird---cuz the last time I went was six years ago and I assumed I'd just be amazing. At this point my soreness rivals the worst P90X workout I've yet to do. Whatever. It was fully worth it. See my very white skin in that picture? Yeah, it's mostly hot pink at this point in my life. Awesome.

What I Didn't Notice the First Time

So, upon viewing Beauty and the Beast for the thousandth time this past Friday I noticed a few things I hadn't before. Maybe cuz the first 999 times I watched it I was no older than 13....who knows? Anyway, here's what was new this time around:
-When the Beast (seriously, how come he never got a name?) is trying to figure out something nice to do for Belle, Cogsworth lists off a few thing; "chocolates, flowers, promises you don't intend to keep..." Nice example for the young boys that will be trying to do something nice for their girlfriends one day.
-During the song "Gaston Reprise" when extolling the wonderful virtues of the burly man (who, despite his rotten character has kind of an awesome voice) LeFue sings, "No one plots like Gaston, takes cheap shots like Gaston, no one persecutes harmless crack-pots like Gaston..." Really, Disney? Crack-pots? Nice work.
-"Be Our Guest:" What is beef ragu? It sounds unpleasant.
-Remember how Belle runs away when the no-named Beast gets mad at her? Well, let's be fair: he did tell her not to go to the West Wing. Right? And she didn't even listen to him. And then he's the one who ends up apologizing! I hate when movies do that. The girl does something wrong, and the guy apologizes. Not cool. (That's the main reason why I REALLY do not like Hitch. Seriously, don't even get me started on that movie.)
-And finally, how come Belle agrees to stay with the Captain No-Name FOREVER for her dad, but she won't marry Gaston to keep him from going to the insane asylum? Where's the consistency?

Anyway, it's still a good movie. Great songs---and if you watch it on youtube they've added an extra scene where the servants sing "To Be Human Again." Good times. Anything else about that movie or other "children movies I may have missed that you guys caught?

I Don't Wanna Grow Up 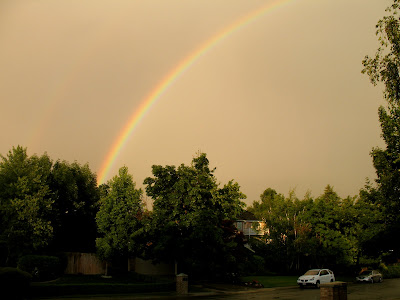 I love the rain. I love the smell and the sound and everything about it. I especially love it in the spring/summer. Last Saturday one of my friends and I ran down the street, barefoot in the rain, to jump in puddles. Puddles up to our knees. It was awesome. Maybe when we got back to her house her brother told us we were acting like little kids.

In Sunday School yesterday we were playing MASH (I mean, paying close attention to the teacher and offering insightful comments). Maybe the person next to us told us we need to grow up.

If growing up means I can't do those two things then I want no part in it.

Several people asked me to post about embarrassing moments. Well, I'm sorry-but I just don't have any. I do ridiculous things on a regular basis so that embarrassing moments are all just blended into one big, fuzzy conglomeration of humiliation. I can tell you about two moments in my life that were particularly humiliating. They were both my cousin's fault. You remember the one I waited to get baptized with? We'll call her Sara. Cuz that's her name---except I just call her Cousin. Well, we did a lot of things together; wear matching outfits, play and coach soccer, take flute lessons, take ballet (actually, that could TOTALLY count as an embarrassing moment since we were kind of awful)...anyway, we spent lots of time together. 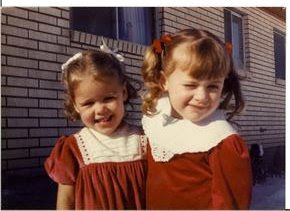 Well, way back in the day, she lived in a little town in Wyoming. We're talking 500 population little. I used to go up and stay with her family for a week or so during the summer. One day, we were riding bikes home from the post office and racing---and I got really far ahead and was totally winning. Well, she was jealous (I think). So, when it came time to turn onto her street (the one and only turn in the 30 second ride home) she turned and just let me go right on ahead. And get TOTALLY lost! In this little town. Now, maybe I should've been bright enough to not get lost---but I kind of have the worst sense of direction in the whole entire world. So there I am, 4 years old, totally lost. Maybe I cried a little bit. When I found my way back to her house----five minutes later---they hadn't even missed me! It was like it was no big deal that I got lost and almost disappeared. My pride was wounded sufficiently. 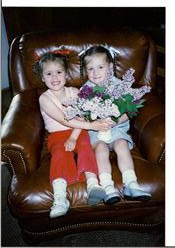 Then there was the time I was supposed to take the trash out at their house. It was Sara's job to tell me where the garbage can was. Well, her being so helpful and all, she took me outside and vaguely pointed in front of her and said, "It's behind that tree." There was a very tiny tree (as in 2 feet tall) right in front of where she pointed, and a nice little flower pot right behind it. So, I emptied all the garbages into that pot. And no, it was not nearly big enough to hold it all. However, about 50 feet away was a large pine tree and a big dumpster hidden behind it. Apparently that was where the trash went. Oops. My only consolation in this was that Sara got in trouble for not showing me where to go---and I was not blamed for being too dense to think a pot was not the garbage can. And also, my aunt cleaned it up instead of me. Maybe she felt bad that she didn't miss me when I got lost. 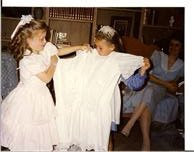 So, in an effort to get Sara back for humiliating me, I'm posting the picture we had taken together when we were 16. I'm not sure why this picture was taken, or why we weren't allowed to smile and be normal teenagers in it instead of trying to look "contemplative." We both kind of hate this picture---but she hates it worse. So this is to get her back. 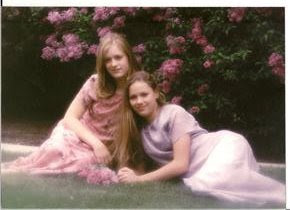 Rychelle asked me to post pictures of "hot soccer dudes." Well really-how could I say no to that? Not everyone is aware of how awesome soccer really is---but if you see pictures of good-looking soccer players, maybe you'll be more inclined to appreciate the sport, no?

Frankie Hejduk---maybe not the best looking player. But his skill and 'don't mess with me' attitude make him all kinds of attractive.

Pat Noonan--you can tell just by looking at him that he's just a solid guy. I like that. 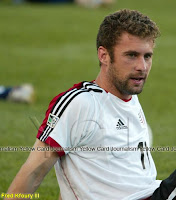 Brian McBride---my all-time favorite player ever! He met his wife when she came to one of his games and stayed to get his autograph. Awesome. 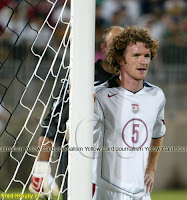 Bobby Convey-the worst thing about him is he's off playing in Europe and I can't watch him as much.

Josh Wolfe---not much to say other than he's really hot, right? The guy in profile behind him is Eddie Pope---best defender ever and another of my favorites.

And here are some boys I've been privileged enough to actually play with.
My very first soccer team---I know it's kind blurry (my scanning skills are lacking), but if I have to point out which one I am we're not friends anymore. 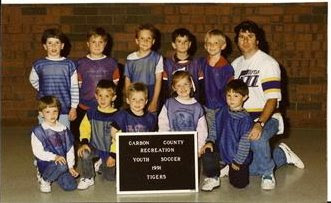 One of my first BYU co-ed teams. I played with some of the people on this team for nearly 4 years. 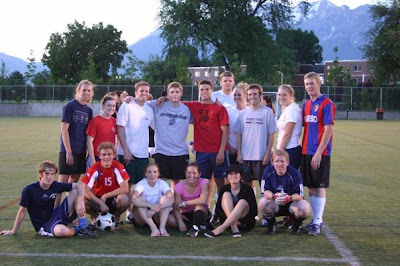 The best team ever; Flava of Love. Yes, our team was named after a VH1 Reality Show. And we rocked---and took home the BYU Intramural t-shirt. 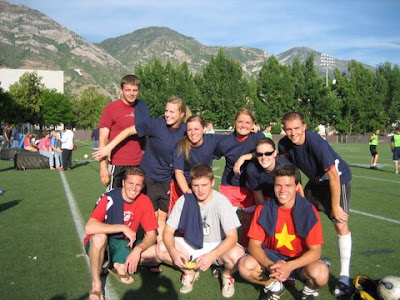