Last weekend I headed to my favorite place on earth (besides my own home town), Cokeville. It's a mini-town in Wyoming where my dad grew up and where I've spent all but two Pioneer Days in my entire life.

We started out Friday night with a BBQ out at the ranch...but I have no pictures of that. Suffice it to say, there were s'mores and that's all that matters when it comes to BBQ's.

Saturday morning, early morning, was the David Dayton Memorial 5K Fun Run. Although the term "fun run" is a complete oxy-moron, it was great being with so much family. Below is the picture of all the David Dayton relatives that ran the race. The race official was yelling out directions and no one was paying attention (cuz it's impossible to get lost on a course with zero turns) and so finally just shot off the gun before anyone was even lined up! I'd like to blame the fact that I never found a good pace on the surprise start, not on the junk food I ate the night before. 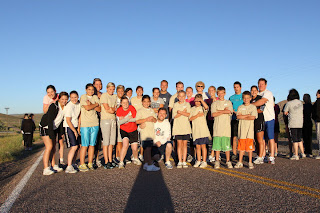 At 10:00, the best parade in the world starts. It goes up and down main street, and takes 20 minutes tops. And there's TONS of candy! Here we are waiting for the Grand Marshall to get things started. 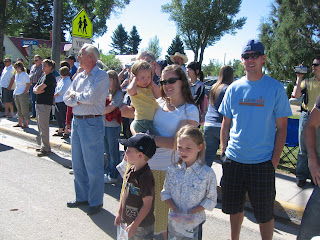 More of my nieces and nephews waiting. 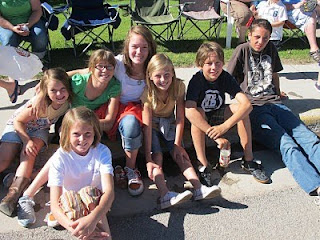 This float has 4 generations on it---beginning with my 100 year old Grandma. She's the one waving under the very large umbrella. 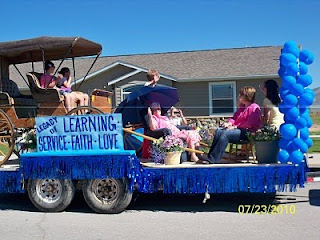 That afternoon was the Family Flag Football Tournament. Daytons won---because they are awesome. There may have been another team that actually won overall, but I can't remember... 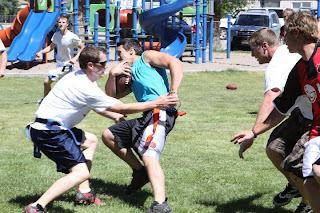 My brother took everyone out to the ranch later that night to set off his homemade bomb. I missed the event...but I hear it wasn't quite as great as anticipated. But hey, at lest the kids waiting are cute, right? 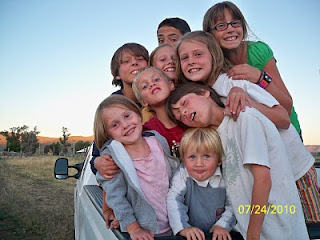 It's a great event. The best things about it are the fact that it brings SO much family together and it's always the same. Right down to the town dinner on Saturday---it's been roast, dutch oven potatoes, cole slaw and cupcakes my whole life.

There's nothing like a celebration in a small town.

Guys, check out the odometer on my car! 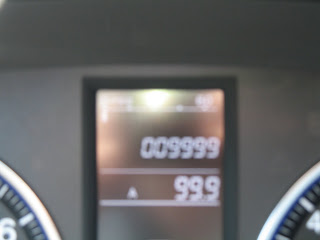 I reached 9,999 miles the same time that I reached 99.9 miles for that gas trip. You can't plan stuff like that! Except that maybe I totally did. And maybe I drove around with a camera in my car for a couple days to make sure I got a picture. And maybe I drove slowly around a parking lot right before it happened cuz I didn't want to try and take a picture while I was driving on a busy road. So what? It's all nines. Isn't that awesome?

I started building a bookshelf for my room today. It's the DIY, comes in a box with all the screws, nails and stickers you need type shelf. I'm no Tim Taylor, but I still feel accomplished after the building is completed and the shelf becomes filled with my massive amounts of books.

Anyway, I'm opening the box, creating my assembly line, and I pull out the provided glue. There's a bright orange sticker on the package that says, "Dangerous if ingested." Well, duh. Anyone that has made it past kindergarten is aware of the fact that glue doesn't belong in your mouth. Without giving it another condescending thought, I began to build and as I was transferring screws, pegs and the like between hands what did I nearly put in my mouth? The glue. Yeah---that knocked my self-assumed brilliance down a few notches.

On a completely unrelated note:Kent on So You Think You Can Dance. I've always like the kid. He seems decent. But the worst thing they could have done to him was make him dance with Neil. Neil is everything that is right with dancing...as far as my limited knowledge goes. Next to him, Kent's previously charming, endearing self seemed trite and immature. Love Neil.

Also, if you know the reference of my blog title, you get 25 fake points. Unless your name is Emily K. in which case you should fully know it and if you don't you should be ashamed. Stop blushin. That's lame.

Has anyone else ever had bugs living in their computer? I don't mean virus, robotic bugs. I mean real-life, six legs, antenna bugs. Seriously. I just had three (THREE!!!) crawl out of my computer! I'm grossed out. And freaked out. And my skin feels creepy crawly. And now I'll probly have horrid, yucky dreams.

Has this ever happened to anyone else? Is there a way to kill these bugs that doesn't involve taking a sledgehammer to my computer? As satisfying as that would feel, the aftermath of having lost pictures, documents and, oh yeah, an expensive computer, makes me rethink that solution.