At the very young age of seven, I first memorized the BYU fight song. My dad's seasons tickets to football and basketball gave me lots of opportunities to sing it. And sing I did. And I loved it. Except for the part that it's in the exact wrong range. A little too low to sing at the band, but if I go an octave up it's too hight. Anyone else with the problem?

Anyway, things have changed. I noticed the first lyric change about six or seven years ago...one I was mostly apathetic towards. Instead of singing, "stalwart men are true, wear the white and blue..." it was changed to "loyal, strong and true..." I guess they thought stalwart was a tongue twister?

But this newest change...I don't like it. I feel like I've bee kicked off the team. Always before I sang, "WE'RE on OUR way to fame and glory...as WE unfold OUR victory story, on WE go, to vanquish the foe..." Well now, I'm supposed to sin, "YOU'RE on YOUR way, YOU unfold YOUR victory story..." I mean seriously, why don't you just write my name below the line that says "CUT"? What did I do to deserve this? Nothing, I say. So, I'm just gonna keep singing it the way I like it. Cuz I'm pretty sure I'm part of that team.

I realize writing this post will expose just how much I enjoy reality TV...but I think I can at least find a support group with Kristina and Deb , so I'll risk it. Now, this top ten list is comprised of my current top ten reality stars so it means I can't write about Gev from SYTYCD, Pete from Season 2 of Biggest Loser or even New York (not the city or State, but the crazy female whose mother is "always telling the truth even when she is lying!"). And I do realize that I'm using the word "stars" in a VERY broad sense of the word.

10. I can't think of a #10---I did this backwards. I'm sure once So You Think You Can Dance is in full swing I'll have plenty more favorites...but I guess you just get the top nine for now.
9. Michael Irvin: former NFL wide receiver on Dancing with the Stars. I love how he's trying to compete with Jerry Rice and I love when he mouths the words to the song when he's dancing. Hilarious.
8. Laura on American's Next Top Model.The girl seems beyond clueless, but according to the judges takes a fierce picture. Now, I don't know if it's fierce or frightening, I'm just telling you what they say. I just like her attitude---she's very southern country and humble, and really, how can you not like that?
7. Clinton Kelly and Stacy London: hosts of What Not to Wear. Considering my last post, do I even need to explain that? Speaking of which, I just have no idea how to upload my video of that...if anyone knows how and can tell me, I'll be happy to share it. Or at least parts of it.
6. Rev Run and his family: starring on Run's House on MTV. Okay, their lifestyle is definitely not normal or something with which I can relate---but c'mon, it's a family on a reality show that is actually supportive of each other and that communicates and cares for each other. How do you not like that? Plus, one time the mom got confused (okay, she always seems a little confused) but she thought her daughter had bought a mountain lion. I'll never understand the process of how she got there.
5. Can The Soup count as reality TV? Cuz if so, then totally Joel McHale. He's absolutely hilarious---and I'll never get tired of the Whitney Houston clip he plays.
4. Kelly Osbourne: Daughter of Ozzy on Dancing with the Stars. Seriously---who would've thought that the offspring of the most disoriented, dysfunctional couple could make me almost cry? She was darling on Tuesday night, and her mom was crying she was so proud. I'm sure Ozzy would have been too if years of drug use and communing with the dark side had not rendered him incapable. She's totally my favorite of the women right now.
3. Coach Mo on the Biggest Loser. His face looks so sad to me---hopefully that changes after he loses lots of weight, right? But he still is so kind to everyone. I just hope he's always that awesome, and doesn't go all crazy like some other past contestants.
2. Louie Vito: Professional Snowboarder and current competitor on Dancing with the Stars. Seriously-watch 5 minutes of this kid in rehearsals and you'll love him, too. He kind of looks like he has no idea what he's doing....but he tries so hard and I love watching him and Chelsea together. 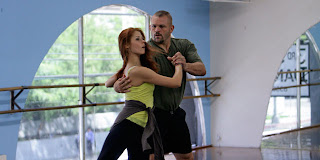 1. Chuck "the Iceman" Lidell: Mixed Martial Artist and former UFC champ now on Dancing with the Stars. I might like this man even more than I liked Ty Murray when he was on. He started out the first week so clueless, and I got a kick out of watching him try to remember to smile while he performed. I hope he's on the show for a good long while.

Who are you favorite reality stars?

Check out Sara at Domestically Challenged if you wanna do your own top ten.

Why Is It Monkeys and Not Monkies?

And really, why moose (plural) and not meese? Or at least mooses? Weird.

I'm linking up to Motherboard today for Randoms and Tunes, FYI.

*I went to the State Fair Wednesday night for the sole purpose of going on the Yellow Slide. LOVE that thing. 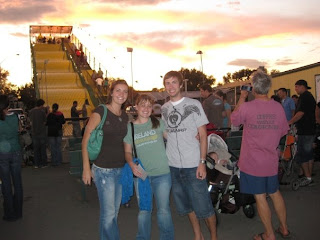 That's me with my cousins, Hilary and Garret. Also known as Celery and G$. At least in my phone.

*When people start to say the word "BBQ" I always think they're going to say my name. Kinda bugs. One time I convinced a boy that my middle name was "Q." Just Q---it didn't stand for anything. And that my family called me Barbie Q. He was mad when I told him the truth.

*I made some other boys mad when I told them that I had grown up in England and moved here when I was 16. Apparently my accent is THAT good that they'd believe me. They were angry when I told them I was joking.

*My old roommate, Emily, and I used to watch "What Not to Wear" together all the time. (We also watched awesome things like Biggest Loser, Laguna Beach, What I Like About You, She's the Man...I'm sure we did other things besides watch TV but I can't think of what right now). Anyway, we worked together and there were some issues with the dress code---so we shot a professional video of "What Not to Wear: BYU Independent Study Version." It was awesome. She was Clinton and I was Stacey...as far as our attitudes. Anyway, it's probly the coolest thing anyone has ever done at the place. And our kind-of supervisor TOTALLY took credit for it when it was finished. Said it was her idea, what she had done to work on it...let me tell you, she did NOTHING other than give her permission for us to work on it during our regular shift. I was angry---but also really passive so I never confronted her and her name is listed as Executive Producer. Lame. Whatever though, the video is still AMAZING. They should consider using it on the real show. Maybe I'll write TLC...

*I drank three 16 oz. glasses of water between 8 am and 11 am today. Hasn't made for the most comfortable work day. Just sayin.

Those are all on my playlist at the bottom of the blog if you wanna check them out. And really, you should want to.

I Must Be A Better Actor Than I Thought

So, I'm sitting in church Sunday before the meeting starts, reverently listening to the prelude music and pondering things of great importance (cuz, you know, that type of behavior really exists in a singles ward...) and this guy asks me, "Hey, will you teach Sunday School for me next week?" My immediate response: "Nu-uh. No way." He blinked and kind of sat there a second. I think I heard crickets chirping between us. Then, "Wow. I don't think I've ever had anyone turn me down so vehemently." I think he thought that would make me feel a little guilty and I'd retract my initial response. Wrong. I proceeded to explain to this fellow that I'm petrified of teaching. That when I was a Relief Society teacher I got sick every week, and stressed and hated, nay--loathed it, and how I will never, ever teach Sunday School cuz there are boys there. Way too scary. And he responds, "Really? You're so outgoing that I would've never guessed that."

I then reminded him I was in the ward a good 6 months before we ever even spoke. That it's basically like pulling teeth to get me to play hostess to game nights. That when given the choice between a movie with 2 or 3 friends and a monster party, I'd pick the movie LONG before the party. After thinking about it for about .2 seconds he agreed---and asked someone else to teach.

First, I would like you all to take a second to recognize the monumental event that just occurred. I posted videos on my blog. Real-life videos. I've never been able to do this before. Unlike Kip, I am not such a fan of technology. Also, if you only have time to watch one video---make it the third one. It's less than a minute and you won't regret it. Unless you have no soul---in which case I can do nothing for you.

Now, on to some random things.

1st: you're going to want to watch this video twice. I promise, it won't make any difference.


2nd: Why am I wasting my time learning how to Pop it, lock it, polka-dot it when I should be learning this dance?!

Whatever happened to all the manufactured British bands? Steps? S Club 7? A Teens? The world is a darker place without them.

3rd: if you don't think this joke is funny, then you're dead inside. Just sayin.

What Do You Do At Family Reunions?

...Hang out with your 14 year-old nephew that has no business being taller than you? (Same with the 13 and 11 year old nieces, and 12 year old nephew.) 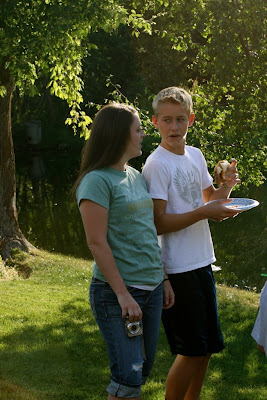 ...Have a monster slip-n-slide for the little kids? 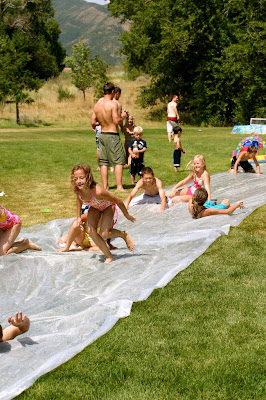 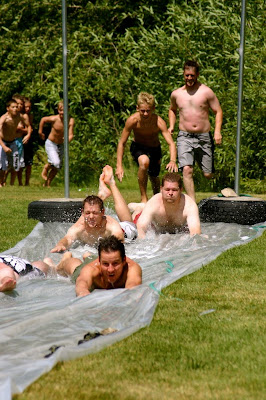 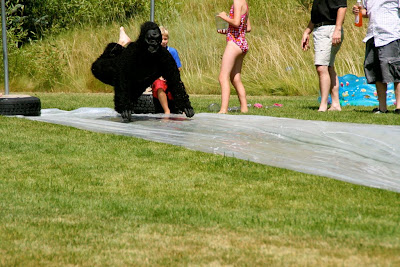 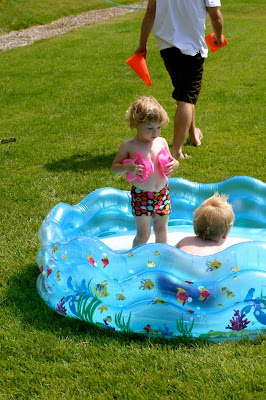 ...Or one year olds struggle with swimsuits in general? 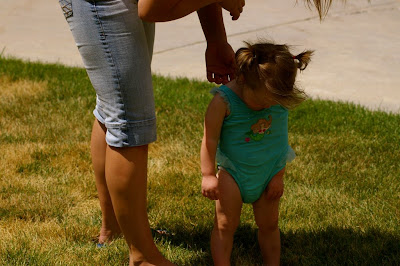 ...Have so many photographers that it'll take 8 years to make it through ALL the pictures taken during the week? 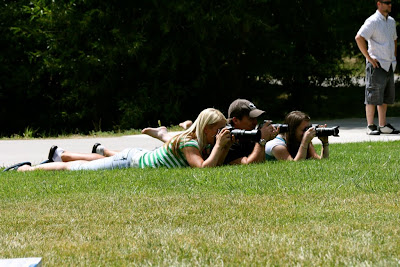 ...Participate in strategic planning sessions for the Gold Medal (aka Snickers) in Family Olympics? 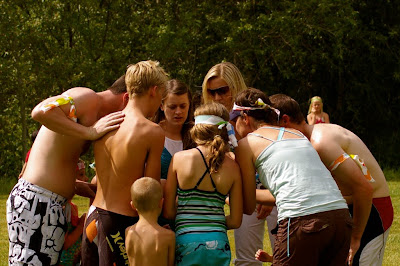 ...Get confused and embarrassed after you hold hands with the wrong dad? (Understandable when there are 11 to choose from.) 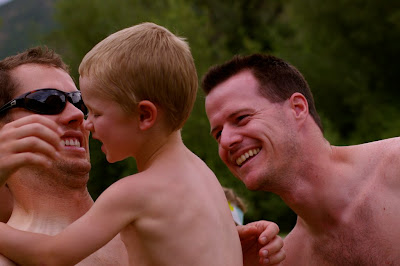 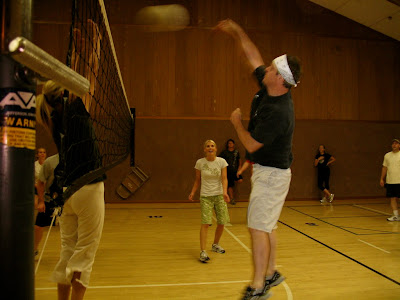 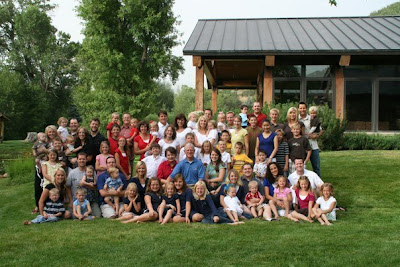 No? That's just my family?
Good to know.