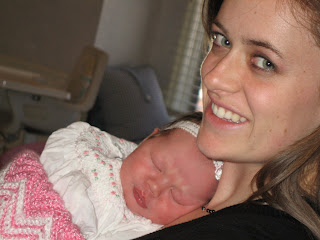 Not to be confused with my cute niece, Pickles. Seriously, isn't she such a cute baby?
But anyway, my pickle comes in the form of being healthy. We're told by a gazillion (I counted) different authorities that we need to drink at least 64 oz . of water a day. Right? So, this is fine with me. I like water. A lot. And I make a habit of drinking it throughout the day. But either I have a ridiculously small bladder or very effective kidneys because it seems like I have to use the bathroom at least once per hour! Let me tell you, this does not 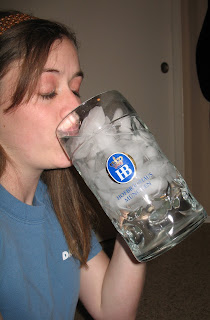 make for an effective day at the office. Plus, my co-workers and boss are probly starting to think that I'm just a huge slacker. Do you know how frustrating it is to use the bathroom, and as soon as you sit back at your desk feel like you need to again?! I have to put time limits on myself so I don't get up more than once in a hour! And according to Jim Carey in "Liar Liar" that may not be healthy....
So what do I do? Drink enough water to be healthy, but be a bad employee? Or, not drink enough so I can be a more effective worker? Or, just try and drink it all after work? And, what's going to happen next weekend when I drive to Utah and have to spend more than an hour at a time in a car without the option of taking a break....? Yikes!

Posted by Barbaloot at 9:57 PM 8 comments

I Got The Mostest! 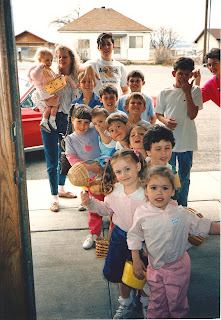 What I've learned recently is that you're never too old for anything as long as there is competition involved. Case in point; the Easter Egg Hunt.
I have fond memories of this throughout the years; my family would always line up according to age to go search for the multiple chocolate treats hidden in my dad's gynecologist office. (The favorite hiding spot was in the stirrups...) Anyhow, as the years have passed my brothers started protesting that they were too old for such things, but their actions when the hunt begins would suggest otherwise.
Yesterday, as my 4 year old niece and 2 year old nephew started their search, rather than watch them discover the candy and help them out, Joey, Perry and I slowly started edging our way around the room grabbing our favorite treats, stepping in front of, or on, the children in an effort to get the most.
The important thing is I won.

Posted by Barbaloot at 3:40 PM 5 comments

1. A Britney Spears song comes on the radio and you do not immediately reach for the button to change the station.
2. After listening to the song for about 30 seconds, you start to think, "Hey. I can relate to this song. It totally fits my life situation right now."
Help. Please.

Posted by Barbaloot at 8:45 PM 6 comments

I'm Embarrassed For Myself...

Posted by Barbaloot at 8:43 PM 7 comments

You know, turns out that March is my least favorite month no matter where I live. I used to dread it in Utah because it was so fickle. And LONG! There is no break for school, no holiday worth mentioning (except this year, because for some reason Easter has managed to land in March) and it pretends to get warm, and then says, "JK-I think I'll go back to freezing temperatures. Fooled you."
Well, it's not too different here in AZ. Granted, the weather overall is more warm, but it's still fickle. And I'm still going to be forced to acknowledge the existence of a holiday whose sole purpose in this modern day is to instigate pinching wars.
On a completely unrelated note; PICKLES IS HERE! Buffy had her little girl on February 28th. And no, she and Joey did not name her Pickles; but I will call her that. They named her Mia. I'm assuming she's cute, as the two of them have had successful ventures in child-making before. I'll know for sure in two weeks!!
For those of you who have been wondering-Buffy is not in trouble. I was afraid Pickles was going to arrive on Leap Day. But, I already called that day for my own child's birthday and didn't want Buffy to steal it. One day, I'm going to have twins and I want to have one on Feb. 29th and one on March 1st. Won't that be awesome? Or, if that doesn't work out, then I'll have one on Dec. 31st and one on Jan 1st. That could be even more awesome, cuz they'd be in separate Primary classes.

Posted by Barbaloot at 9:08 PM 3 comments