But first, a scary story! I actually posted the confession part of this earlier, then I remembered this scary story and wanted to jump on the bandwagon of everyone sharing those today. So, here goes:

My freshman year of college I lived at home, and one night was headed over to my friend, Liz's, apartment. I was taking my dad's car, and when I went out to the garage the door was open. This is weird cuz my mother is more OCD than I am and insists that the door is ALWAYS kept closed. So, I got a little freaked and started imagining guys waiting in the cars to get me. Okay-I know. I was 19. But still. That's my worst nightmare ever; being grabbed while I'm driving. And by that I mean I've literally had nightmares about it.
So anyway, I go back inside and make my mom come out to the garage with me to check for scary guys. We determine there's no one there---and I head out. A few hours later, my dad called asking if his checkbook was in his car to which I say, "negative." He can't find it. Then, my mom looks in her car and it's clear someone was in there looking through the glove compartment and such. At which point we realize, someone really HAD been in the garage when I went out there and ran away when I went back inside. They'd managed to get my dad's checkbook which he left in his car (don't do stuff like that), but not my mom's. How freaky is that?!?!
Moral of the story-keep the garage closed. And also, you're never too old to have your mom check for scary guys trying to get you.

Now, on to the confessions.

-I used my 4 year old niece as an excuse for seeing High School Musical 3. I probly would have seen it no matter what, but I felt a little less dorky going in with her and her mom. And also, I LOVED the movie.

-I share books with my 13 year old nephew. Either he's too grown up or I'm too immature...

-I broke out my Backstreet Boys CD from high school the other day and fully rocked out. Seriously, if you saw a crazy girl at a stop light recently, it may have been me. And if wasn't me, I'd bet that girl was listening to some boy band, too.

-In 9th grade my English class watched West Side Story and I cried at the end. But, I claimed it was the girl in front of me who cried.

-I get a kick out of seeing how many days I can go without washing my hair without it being too disgusting. That doesn't mean I don't shower. Gross. Why would you think that? Anyway, one time I went six days without touching it with shampoo. (Or lotion.)

-I bought some of these yesterday. It was one of those stupid compulsive purchases of the items they put on display at the front of stores. I'm such a sucker. And those things are naughty!

-I get irritated when people use "at" to end their sentences. I even had to re-phrase how I put that question so I didn't do it.

-Tuesday was National Chocolate Day and I did nothing to celebrate. I'm so ashamed.

Okay, now it's your turn to confess. If it's something really awful, like you own an Enrique CD, feel free to post as anonymous. 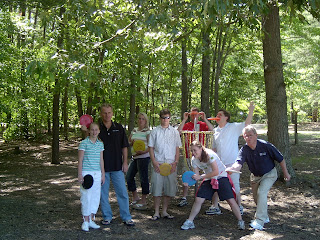 The reason I like this picture so much is cuz I think it's a pretty good display of the personalities in my family. On the left are the two nice, normal people who aren't related 'cept by marriage. Then there's the rest of us that see a camera or hear the words "1-2-3" and think we're supposed to do some sort of contortions with our face, body or both. And this picture is actually pretty tame compared to some we've managed to take in the past.

Oh, and frisbee golf, or frolf if you will, is pretty fun. Minus the fact that I'm horrendously awful at it.

And I tag Margo cuz she hasn't commented on my blog for 8 years and so I'm mad at her. But only fake mad.

I Dream in Color, But I Think in Black and White

I realized this the other day when my dad was telling me a story about when he was a little boy and in my mind, I saw the action as if it were black and white. I'm assuming that this is because the pictures I've seen of my parents as children are in black and white. That's not because their families were trying to be artsy and cool...it's cuz color hadn't been invented yet. And I don't just mean in pictures. I mean, they literally lived in black and white.

Okay, that's not true. But it would be funny if it were. Anyway, I take the pictures I've seen of them and put them into the scenarios they describe. But I don't bring color into it.

Is that weird? Does anyone else do that? I asked my dad if he did it with regards to his parents and he just laughed at me. 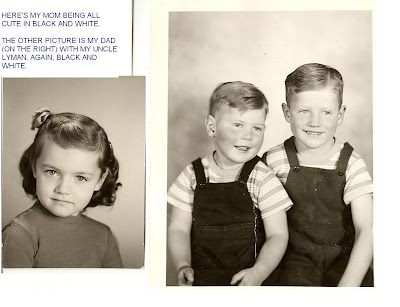 ...your friends don't appreciate your new sense of fashion?

Gifs at Giftube.com Poor goat was just trying something new.

Even worse, don't you hate it when your sense of fashion is awful and your friends don't bother to tell you?! They just take pictures of you looking foolish so you can't escape your stupidity in the future.

Okay, so Shelle over at Blokthoughtsnmore is doing a competition. And the winner at the end of the month gets one of those little ipod things. And since I really want one, but I'm afraid of technology and spending money, this is how I'm gonna get one! But in order for me to get it, you have to vote for me. So, if you think this is funny, then go here and vote for me in the comments. Or, if you think it's lame and that no one else will vote for me, go give me a pity vote. I'm not above those. And if I win-I promise I won't do something totally lame like try and match my new ipod with my socks or something.

...and never been more tempted to than I was last night.

As a general rule, I avoid Dancing with the Stars because I absolutely abhor Bruno Tonioli. His ridiculously pretentious accent grates on my ears and his attempts at being witty and simultaneously shocking make me cringe. And also, Carrie Anne Inaba is just as bad. Saying mean things while acting nice is worse than just being plain mean. No one is fooled by your act.

That being said, I have watched a little bit this season. And mostly because of Rocco. I'm pretty sure that if he plays guitar that he is my dream man. I think he is so cute and funny. Granted, he's not the best dancer I've ever seen, but does he really deserve to get kicked off before Cloris? Truly? Her very presence is like a black hole that sucks out all possibilities of intelligent conversation.

So, I'm still not voting. But if I did, I'd fully vote for Rocco. And if he does get kicked off tonight, then I will only be tuning in on the parts where Cody Linley performs. He's almost as cute as Rocco...but he needs to be 10 years older.

Buffaluffagus tagged me. Cuz she thinks I'm quirky---but she is wrong. I'm just a Plane Jane. But anyway...here are six quirky facts about me.

1. Lately I have this thing where I don't like my dreams. So, in order to avoid them I stay up until I can hardly walk straight and then go to bed. I'm usually so tired that I don't remember any dreams I had. That would probly explain why I'm writing this at nearly 1 AM...

2. I hate Halloween. I think it's the worst holiday ever---and a horrible excuse for organized begging. I'm hoping that when I have kids I'll somehow be able to raise them without them realizing it exists.

4. I can't listen to the radio or watch TV with the volume on an odd number. It drives me crazy. Except for intervals of 5---which is nice cuz I hate the number 6 or any number that contains it. So basically, even numbers and 5, 15, 20 25....I don't like the number ten, either. Or 30. And I could live without the number 70...but no one ever turns the volume up that high. Right?

5. I don't think the color pink has any place in athletics. Especially pink soccer balls. I just feel like there's something superficial about it.

6. When I lived in Arizona it was really hot at night and so I slept on top of the covers. Now, I'm all used to that and never sleep under the covers anymore. But hey---I never have to make my bed now!

I tag Mishelley and return the favor to Trisha.

So, Lady Catherine de Bourg thinks quite highly of herself---there's no doubt about that. In one scene she says, "If I Had Ever Learned I Should Have Been A Great Proficient." I don't know if there's another phrase that bugs me more than that. You mean, if you had ever had lessons and put in the time and effort and money it takes to become a great musician, you would have been one? Well, duh.

And do you know, if I had taken swimming lessons my whole life, and paid for great coaches and trainers and such, I would have been an amazing swimmer! I mean, I probly could have beaten Michael Phelps.

Ooh, and also, if I had gone to art school and learned all the different techniques and styles, and had access to the best materials, I'd be a phenomenal artist.

I mean really---of course you would have been good if "you had ever learned." My 11th grade Humanities teacher was talking about ballet one day in class when she makes some sort of comment about how she would have been an awesome ballerina if she hadn't quit at a young age. To which I responded, "Well sure. And if I hadn't stopped lessons at Mrs. Pinato's studio when I was 7, I'd probly be a prima ballerina in the American Ballet Company right now."

Yeah...apparently she didn't appreciate my style of sarcasm. I suppose that's understandable since I was blatantly mocking her and that sort of thing is frowned upon by teachers. Especially ones that could have been ballerinas. Needless to say, she was pleased as punch when I walked into her class my 12th grade year for English. But I mean, if I would have just taken the GED I probly wouldn't have had to take her English class...